Sir Clive Sinclair  was the inventor who brought pocket calculators and the earliest cheap and accessible miniature computers into British homes in the 1980s.    Although his company had changed names several times and was eventually bought by Amstrad, during his prime, he was made businessman of the year, knighted, championed by Margaret Thatcher and became, briefly, a multimillionaire.

Proving to be a better inventor and self-publicist than an entrepreneur, he designed a three-wheeled, lightweight, electric vehicle, with a top speed was 15mph and a range of  20 miles. It retailed for £399 and  was rushed into production, with Sinclair predicting annual sales of 100,000.  Unfortunately, its flaws were only too evident and it failed to take off in the market. 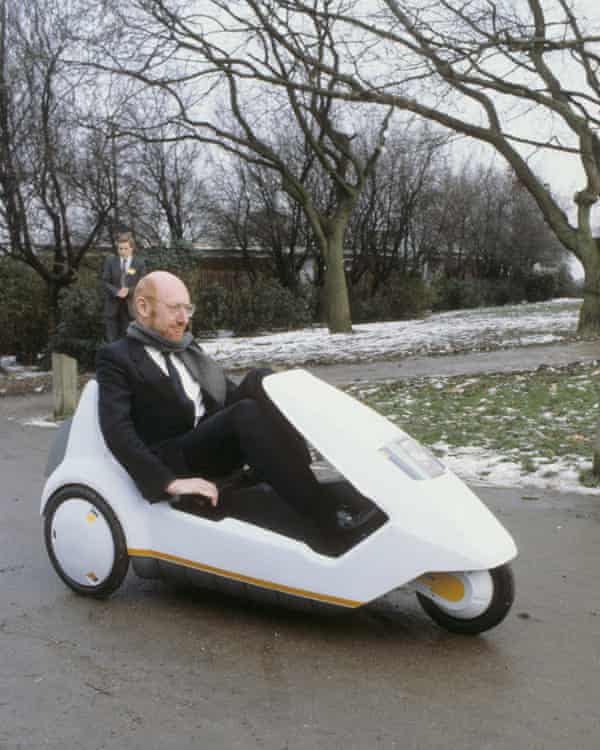 Marketed with the slogan “A Whole New Way to Get About”, it was damned with faint praise by the Department of Transport, which said: “As an alternative to pedal cycles it is not thought likely to have a worse safety record.”  Drivers felt vulnerable, not only to passing traffic but to heavy breezes and gusts of rain, and only a few thousand were ever sold.

Within months Sinclair was forced to sell his computer company to Alan Sugar, the owner of Amstrad, close the office headquarters in Cambridge and lay off virtually all the staff. Sinclair later admitted that January had not been the best time to have launched the C5, as its batteries tended to pack up in cold weather.   “We sold quite a few thousand and people loved them, but clearly I should have handled it differently. It could have succeeded. I rushed at it too much.”

Sinclair was the son and grandson of engineers, the eldest of three children of George Sinclair, a mechanical engineer who had his own machine tool business for a time, and Thora (nee Marles). Born in Richmond, Surrey, early in the second world war, he had his childhood disrupted, first by evacuation to Devon with his mother and later, after the collapse of his father’s business, by moves to different parts of the south of England, where he was educated at a succession of private schools. His enthusiasm for inventions started early – apparently because of an inventor character on the children’s radio programme Toytown – and by the age of 12 he had designed a one-person submarine out of a petrol tank.

Leaving St George’s college in Weybridge with two A-levels, in maths and physics, he decided not to go to university. Instead he found a job, initially on the trade paper Practical Wireless, before going on to edit electronics handbooks and becoming technical editor on the journal Instrument Practice.

Sinclair’s passion was for miniaturisation. In 1962 he and his first wife, Ann (nee Trevor Briscoe), set up a company in their flat in Pimlico, central London, making micro amplifiers and then cheap pocket radios marketed as the Sinclair Slimline, which they assembled using transistors bought cheaply from Plessey and dispatched to customers from their kitchen table.  The first Sinclair pocket calculators appeared 10 years later, powered by a microchip and half the size and price of the bulkier models then on the market. Although the calculators’ design and reliability left much to be desired, they retailed for just under £80 but cost only £10 to make, and orders flooded in at the rate of 100,000 a month.

A digital plastic watch followed, but this, too, had problems, including a short battery life and faulty casing. Sinclair’s next project was to design a slimline television and a pocket television, both well ahead of their time, but his company was in growing financial difficulties as its calculator business was undercut by larger, better-financed, rivals.

Sinclair Radionics required bailing out in 1976 by the National Enterprise Board and again the following year.   Eventually the board acquired a three-quarters share of the business and Sinclair left in 1979 to set up a new company, Sinclair Research, which would eventually produce the first cheap personal computers that could be used at home.

This was at a time when most people thought of computers as whirring machines as large as a room. Sinclair’s first, the ZX80, was 9in (23cm) wide and 7in (18cm) deep and could be bought in kit form for £79.95 or £20 more as ready assembled – a fifth of the price of other basic computers in offices. It turned out that he was answering a need people did not know they had for their leisure time. Sinclair had achieved his ambition of producing a computer for less than £100 but it was very basic, needing to be plugged into the television to provide a screen and with a cassette to store data. A year later came the ZX81 and then, marginally more sophisticated, and costing £125, the ZX Spectrum, which was made under licence in the US by Timex.

With no commercial rivals initially, the machines sold in their thousands – a quarter of a million of the 1981 model in the first year – and the company’s profits soared. By 1982 it was making £8.55m on a turnover of £27m; a year later the company was valued at £136m and the profits had reached nearly £20m. If many owners and their children used their computers to play new sorts of games such as Monster Maze, they were also taught about programming and other technological skills.

Sir Clive will forever be remembered in the retro computer community as the father of the ZX series of computers.

The Vintage Computer Festival East will be held at InfoAge Science and History Museums at 2201 Marconi Road in Wall, NJ 07719 on October 8th ,9th and 10th.

For more information on this and other vintage computer events, visit the Vintage Computer Federation at https://vcfed.org/wp/festivals